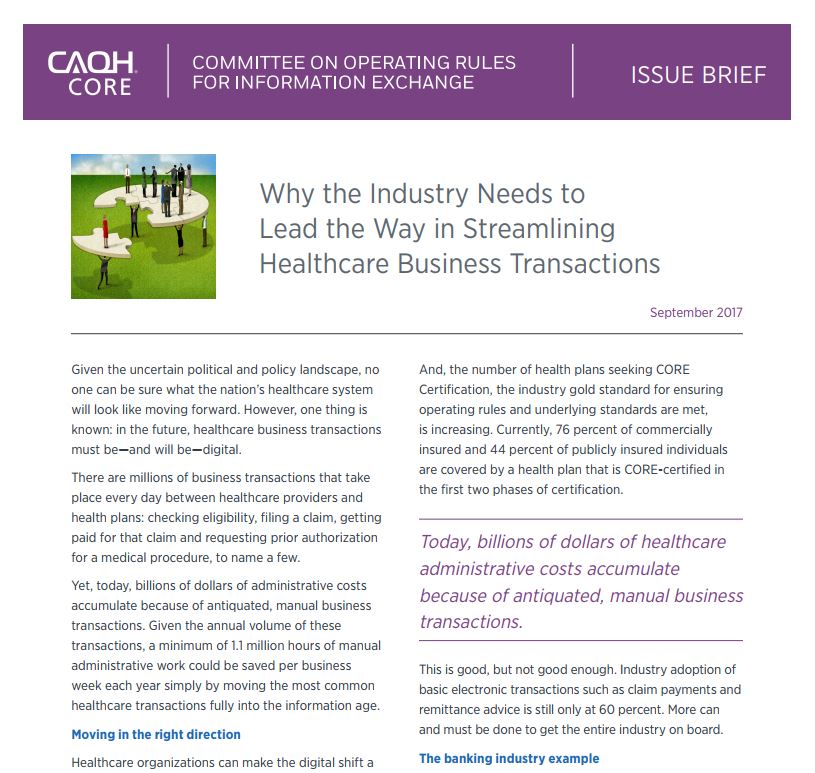 All HIPAA-covered entities are required by Federal law to adopt the Phase I & II CAQH CORE Eligibility & Claim Status Operating Rules* by January 1, 2013.

In 2010 the National Committee on Vital and Health Statistics (NCVHS) Subcommittee on Standards, an advisory body to the Department of Health and Human Services (HHS), held hearings on mandated operating rules for eligibility and claim status transactions in response to administrative simplification provisions in Section 1104 of the Patient Protection and Affordable Care Act (ACA). CAQH CORE provided testimony at these hearings. NCVHS then issued a letter in September 2010 to the Secretary of HHS recommending adoption of the Phase I & II CAQH CORE Operating Rules for Eligibility & Claim Status. In July 2011, the Centers for Medicare and Medicaid Services (CMS) published an Interim Final Rule with Comment, CMS-0032-IFC: Administrative Simplification: Adoption of Operating Rules for Eligibility for a Health Plan and Health Care Claim Status Transactions, with the following key features:

In December 2011, CMS issued a notice adopting CMS-0032-IFC as a Final Rule and industry implementation efforts are underway for the January 1, 2013 effective date for implementation of the Federally mandated CAQH CORE Eligibility & Claim Status Operating Rules.

In June 2012, CAQH CORE and several other organizations gave testimony to the NCVHS Subcommittee on Standards. As the authoring entity of operating rules for eligibility and claim status, CAQH CORE provided its perspective on how stakeholders are preparing to implement the mandated rules.

See here for a high-level overview of the Phase I & II CAQH CORE Operating Rule requirements and clinical alignment.

Note: On January 2, 2013, CMS announced a 90-day period of enforcement discretion for compliance with Eligibility and Claim Status Operating Rules.

The following dates are critical for industry implementation of the Federally mandated CAQH CORE Eligibility & Claim Status Operating Rules. Note there are two types of penalties related to compliance with the mandated operating rules.

*NOTE: The CMS OESS is the authority on the HIPAA and ACA Administrative Simplification provisions and requirements for compliance and enforcement. The CMS website provides information on the ACA compliance, certification, and penalties and enforcement process.

Role of CORE for Eligibility and Claim Status

For more information on the role of CAQH CORE, email CORE@caqh.org.

Getting Involved with CORE for Eligibility and Claim Status

The Phase I & II CAQH CORE Eligibility & Claim Status Operating Rules have been Federally mandated under the ACA. However, CAQH CORE continues to welcome participants from all healthcare stakeholder groups to contribute to future operating rule development. There are multiple ways to become involved in the development of operating rules that drive the business of healthcare:

As CAQH CORE continues to evolve its rule development processes, entities are encouraged to submit ideas for future operating rules or modifications to CORE@caqh.org.

Interested stakeholders are encouraged to contact CAQH CORE to learn more about how to become a CORE Participant at CORE@caqh.org.

CAQH CORE is committed to educating the industry on the value of operating rules and how they build on standards. The scope of the CORE rules to date reflects the realities of how health plans and providers can use electronic transactions to move the industry forward while supporting current operations. The CORE rule development and voting processes are transparent and inclusive, and highlight the roles of those who need to implement the rules: health plans, clearinghouses/vendors, and providers.

View the complete list of CORE Education Events (including copies of past sessions).

View the complete list of CAQH CORE Town Hall Calls (including recordings of past sessions).

Interested in having CAQH CORE present at your event/organization? Email CORE@caqh.org.

CAQH CORE has a number of resources and tools available to assist entities with implementation of the CAQH CORE Eligibility & Claim Status Operating Rules. To view a full list of resources, please visit the CORE Implementation Resources webpage.